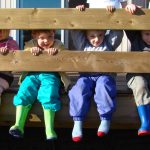 Over the years there have been several kids rescued after they’d been kidnapped and held for several years by their kidnapper. Most recently, the three women rescued from the “house of horrors” in Cleveland come to mind. Thankfully, there are a lot of names of the rescued I could list, which doesn’t balance out those who have been lost, but it does give hope for those still missing.

My new book, Critical Pursuit, is about a police officer whose mission it is to find kidnapped and missing children. Her back-story is that she herself was kidnapped at a young age but rescued and brought home safely.

Writing about Brinna Caruso and her adult mission to protect children from predators who seem to be everywhere now a days, made me reflect back on my own childhood and give thanks that I was raised in a simpler time. As a kid I remember riding my bike everywhere. I had a sting-ray with a banana seat and u-shaped handle bars. I’d chase the ice cream man from block to block.

After we moved from a flat neighborhood to one with hills too steep for racing around on bikes, I rode horses. I can remember riding by myself on fire roads for hours, with my dog following along. I don’t remember worrying about predators or bad things happening.

Fast forward many years, when I worked in Long Beach I bought a house in a quiet neighborhood near El Dorado Park. The neighbors two doors down were quick to come introduce themselves. Yes they were welcoming, but they also wanted to know who the new person was because they had a young daughter they were vigilant in protecting. Wise parents, but a little sad that the world is the way it is now. Most kids don’t live where they can roam freely without fear of a park pervert and parents are justified and required to be vigilant.

I recently moved out of California to a small town in Oregon where I was surprised to discover my neighborhood is a place like the one I remember growing up in. Kids ride their bikes in the street, they play football, ride skateboards and toss balls around. Little girls have knocked on my door asking if they can walk my dogs. All in all it feels safe and old fashioned. I know that the parents are no less vigilant, but it’s great being in such a neighborhood and seeing kids laugh and play unburdened by worries of a dangerous world.

If you feel the need to help keep kids safe, please visit the National Center for Missing And Exploited Children for tips and information on how to help.

12 Responses to A Simpler Time – Growing up in Mayberry