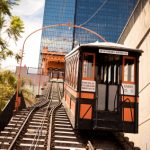 My mother was born in 1924. She grew up in Los Angeles, sometimes living in the city proper, sometimes in an outlying area. Her LA is vastly different from the LA I see in my minds eye. The LA I see is a crush of freeways, traffic, and bad tempered drivers. The freeway transitions are always jammed, the bridges and signs covered with graffiti, and parking costs more than lunch.

Mom’s LA was before freeways. It was a wonder world of streetcars, the Big Red Cars and the yellow line, a place where my mom and her brother could walk to the pool in Griffith Park on a summer day. Or if they had a bit of money they could take a streetcar to Ocean Park or just about everywhere. “You’d go to the main terminal,” she tells me, “and stand in line for the streetcar that was going where you wanted to go and for less then a quarter, you could go anywhere. The Long Beach line was the best. It went fast and got you there in record time.”

When she was older she and her girlfriends would ride the streetcar to dance with servicemen. She met my father when he followed her home on the streetcar. That would be creepy today, but they have been married 68 years. Streetcars were for the most part social and safe, the exact opposite of any freeway you could name today.

Don’t get me wrong, I don’t want to give up my car for a streetcar, no, but I sometimes long for a less hectic life, a less crowded city to wade through, and the absence of traffic. When I listen to mom’s stories, I try to imagine Los Angeles without freeways and with about a quarter of the current population.

I recently gave my mother a biography of Raymond Chandler, one of my favorite authors. He lived in and around LA the same time as my mother and in his books, my mother’s Los Angeles comes alive so I knew she’d like the book. I was right, she recognized a lot of the places in the book where Chandler lived and worked. It dawned on me that I can glimpse my mother’s LA when I read Chandler or any other gifted writer of that time period. I can hear the clang of the street car, the laughter of the children and imagine a city without freeways.

I love reading for a lot of reasons and knowing that now, I can get a glimpse of my mother’s LA through the pages of a good novel just gave me another reason.

2 thoughts on “Seeing Los Angeles Through My Mother’s Eyes”