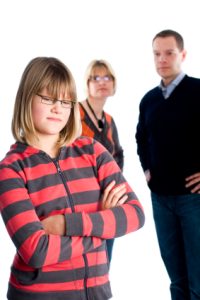 The other day I was sitting in a sandwich shop eating lunch. It was after three in the afternoon so school was out. There’s a high school just up the street from the sandwich place so consequently the shop was packed with students. In the group closest to where I sat, there was a guy and a girl hanging all over each other, they were probably about 13 or 14 and they were taking pictures with a phone, I guess trying to see how close they could get their faces to one another.

After a few minutes the couple picked up their things to leave and the girl called out to another girl, “If my mom calls, tell her I’m at your house.” They then left the shop draped all over one another. I’ll admit I wished I knew the mother so I could be a tattletale.

The scene made me think about my years working as a juvenile detective. I’m not a parent, but that job made me appreciate how difficult it must be to be the parent of a teen. In juvenile we took missing/runaway reports and often a distraught parent would call to report a teen missing with no other information than the kid didn’t come home from school. Many times the parent couldn’t tell us if there was a friend’s house the teen could be at. They’d say, “my kid would call” and be furious because we wouldn’t cancel every other call, pull in SWAT and every local law enforcement agency to look for Johnny or Jane.

(Police reports for missing/runaway children are taken whenever a responsible party calls, there is no 24-hour waiting period but missing reports where the child is under 12 or developmentally disabled are considered critical. Reports taken for older teens are not usually critical unless there is more information than he just didn’t come home from school, e.g. Signs of foul play or indications the child is in immediate danger. The difference between a critical missing and a missing is the amount of immediate manpower assigned.)

More often then not, we’d get a call a couple of hours later telling us Johnny or Jane had been out with a friend and just showed up home. I personally never handled a call where foul play had occurred and a kid disappeared completely or was injured in some way. I realize that does happen, but going back to the couple in the sandwich shop, I wondered if the girl’s mother had any idea her daughter was so close to a boy. I wondered if the mom knew the boy’s name, his parents, etc. And I wondered if she knew that her daughter’s girlfriend would lie so easily for her.

Thinking as a police officer, I would say that parents need to know their kid’s friends. They need to know what their kids do during after school time when they are not supervised. At the very least, if they do have to call the police because their child doesn’t come home they should have an idea about their child’s friends and likely frequented destinations. I’ve heard it said that when kids hit puberty it can appear to parents as if their sweet child has been replaced by a sullen alien. But no matter how sullen a child is, parents should ask questions and know as much as they possibly can about their kids.

I hope the parents of the kids in the sandwich shop ask questions and know as much as possible about what their children are up to.