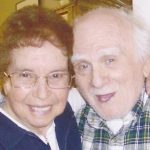 My dad was a member of the greatest generation. Born in 1916 he served stateside in the air force as an airplane mechanic (B26) during WWII. He met my mom while he was in the service, followed her home on the bus and they were married three months later. She must have seen something in him because my mom came from tough beginnings; her father left her mother during the depression with five kids to raise. In my dad mom found a man who wouldn’t quit on her or leave the family high and dry when things got tough.

And things did get tough because life is what it is. With three boys under the age of ten their house burned down and the family lost everything but a few photos. I have some of them, still singed around the edges from the fire. My dad did what he had to do to get the family back on its feet. My dad was not a quitter, he was a fighter, someone you always wanted on your side.

I came along after the dust had settled and new digs built and my sister came three years later. More ups and downs jostled the family but through nearly 70 years of marriage my dad remained steadfast for his family.

As I write this it’s Saturday and I have nothing to do but laundry and I’m very sad. For the last two months we’ve had to be somewhere every Saturday, and just about every day, to see my dad, whether the hospital or the Alzheimer’s care home or lastly the nursing home where he died. But dad’s gone now and I never thought saying that would make me feel so empty. You see the last two months had been so hard on my dad, he been through so much bad stuff, that I thought his going home to heaven would bring me relief. Instead I’m sad for me because as difficult as he was, I miss him.

He was one of a kind, larger than life. Growing up was a roller-coaster because my dad was bi-polar, something that was not diagnosed until he was well into his eighties. Until medication he was a man who could fly off the handle at the drop of a hat and rage with verbal abuse. He was also capable of the opposite in generosity, kindness and caring for friends and family. And for as long as I can remember, he never slept well, never seemed to have any kind of peace.

Going through old pictures I read a story of a man who worked hard all his life, he’d say “busted his ass.” For a large part of forty years he was always building something, working on a vision he had for the house he and my mother lived in. It was only when advancing age and failing eyesight kept him inside that the house began to fall apart.

Going through his possessions there is surprisingly little in the way of personal treasures. He didn’t spend money on gold watches or expensive things for himself. In fact, if you were a guest in his house and you admired something he had, he’d probably give it to you. His only treasure was a ring that belonged to his brother. He wore it all the time until my mom took it off his finger during a hospital visit. She didn’t want it to get lost.

What was important to my dad was his family and passing something down to his kids. To that end he accumulated property because as a child of the depression, property held its value as far as he was concerned. You could always live in a house.

A fall was the beginning of the end for my dad. He broke his arm and a stay in a nursing home for rehabilitation did something to his mind. When he came home he was not the same man. While in time he did regain some, it was obvious that dementia was taking its toll. I moved in to help mom take care of him and we eventually had to sell the house my father had poured his heart and soul into in order to move to a smaller, more manageable home. There, over the course of four years, my dad slowly wound down. Imperceptibly at first, and then horrifyingly fast the last two months of his life.

Through all of it though, when he was lucid, he was first and foremost concerned with his family. One of the last things he said to me was in the hospital before his leg had to be amputated because of a blood clot. He’d not been responsive to the doctors, seemed to be in the la-la land of dementia during the drama that was playing out. I held his hand and at one point he looked at me with unclouded eyes and he said, “Will you take care of mom?” I nodded that I would, hoping that he was not being prescient. But he was, he never really recovered from that surgery. The lucid light in his eyes faded after he acknowledged my answer and forty days later he was gone.

I think it’s an odd irony of life that the most difficult people in our lives often leave the biggest impact. Growing up I was daddy’s girl but somewhere along the line I began to believe he was an obstacle not an advocate. We fought about politics and religion and I resented the fact that he always wanted me home, didn’t seem to want me to grow up. But now that he’s gone, the loss cuts deep. My dad was one of a kind, definitely no mold remaining where he was concerned. I miss his bluster, his swagger, his smile and most of all his sure presence. I could always count on my dad.

Well, Dad, I’m sure you’re in heaven now, and finally at peace. I’ll rejoice for you knowing that I’ll see you again one day and when I do you’ll have both legs and your eyes will be clear and unclouded by dementia. Until then I want you to know that I’ll do the best I can to look after mom, I’ll be as trustworthy and steadfast as I know you would have been, and indeed as you were for my whole life.

I send my love Dad, until I see you again, I’m sure you’re in heaven doing what you love, busting your ass to build a vision.

1 thought on “A Light Goes out in the Greatest Generation: Dedicated to my father, Rocco James Cantore”