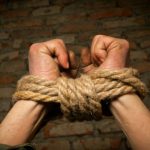 The other day I listened to a message given at a church in Florida. At the beginning a young girl gave her testimony about how she was brought here to the US from Mexico by human traffickers when she was only 17 years old. The pastor was visibly moved to think that in this day and age, here in the United States, a young girl could be brought against her will and sold for sex. Unfortunately it is all too common. According to Humantrafficking.org, It is estimated that 14,500 to 17,500 people, primarily women and children, are trafficked to the U.S. annually.

When I was still working in law enforcement I saw a training video that told the story of an apartment complex turned into a virtual prison by traffickers. They brought laborers to the US illegally and then kept them in apartments, only letting them out to work and even then they were closely monitored. They even set up a company store in the apartment complex for the captives to shop, but they charged exorbitant prices, basically taking the little money back that they paid the captives for their day labor. The apartment complex was not out in the boonies, it was right in the middle of a normal neighborhood.

The traffickers often prey upon the poor and the struggling. They promise them high paying jobs in countries like the US, Italy, France, Germany, etc. The victims often leave their home countries willingly with the trafficker, but once they get to the desired country, the trafficker will confiscate the victim’s ID and papers and keep them confined, unable to do anything but what the trafficker wants. Traffickers tell the victim that the police can’t be trusted, they are in the country illegally so if they complain to anyone they will go to jail.

In this country even if a victim of trafficking is here illegally, they will be treated as a victim and given a safe place to stay, in a shelter of some kind, until hopefully, the trafficker is prosecuted.  Law enforcement tries to get the message out that being the victim of human trafficking is not a crime, it’s the trafficker who needs to go to jail. Human trafficking is modern day slavery. And just like a trafficking operation may be set up in a normal neighborhood, a trafficker is not always a shadowy criminal. I got this from the FBI website (http://www.fbi.gov/news/stories/2013/january/targeting-human-traffickers-helping-victims):”Last month, a Kentucky cardiologist and his ex-wife pled guilty to recruiting a Bolivian woman to work as their domestic servant and holding her unlawfully for nearly 15 years. The couple took her passport, threatened her with deportation, and falsely promised that her wages were being put in a bank account.”

Also from the FBI website, there are resources if you have information or suspicions about a situation near you. “If you believe you are the victim of a trafficking situation or may have information about a potential trafficking situation, call the National Human Trafficking Resource Center (NHTRC) at 1-888-373-7888. NHTRC is a national, toll-free hotline, with specialists available to answer calls from anywhere in the country, 24 hours a day, seven days a week, every day of the year related to potential trafficking victims, suspicious behaviors, and/or locations where trafficking is suspected to occur. You can also submit a tip to the NHTRC online.”